Get a Quote
You are here: Home » Inorganic Chemicals » Potassium permanganate
Share to:

Potassium Permanganate can be used as an oxidizing agent for disinfection on hatcheries and aquaculture facilities.  It is also used as a water treatment additive to react with organic matter in a pond such as algae, bacteria, and some parasites.

This product ships as a hazardous material and pricing varies depending on the quantity ordered and the delivery location.

Potassium permanganate is used for a number of skin conditions. This includes fungal infections of the foot, impetigo, pemphigus, superficial wounds, dermatitis, and tropical ulcers. It is on the World Health Organization's List of Essential Medicines.

Potassium permanganate is used extensively in the water treatment industry. It is used as a regeneration chemical to remove iron and hydrogen sulfide (rotten egg smell) from well water via a "manganese greensand" filter. "Pot-Perm" is also obtainable at pool supply stores and is used additionally to treat wastewater. Historically it was used to disinfect drinking water and can turn the water pink. It currently finds application in the control of nuisance organisms such as zebra mussels in fresh water collection and treatment systems.

KMnO4 is used in qualitative organic analysis to test for the presence of unsaturation. It is sometimes referred to as Baeyer's reagent after the German organic chemist Adolf von Baeyer . The reagent is an alkaline solution of potassium permanganate. Reaction with double or triple bonds (-C=C- or -C≡C-) causes the color to fade from purplish-pink to brown. Aldehydes and formic acid (and formates) also give a positive test. The test is antiquated

Potassium permanganate can be used to quantitatively determine the total oxidizable organic material in an aqueous sample. The value determined is known as the permanganate value. In analytical chemistry, a standardized aqueous solution of KMnO4 is sometimes used as an oxidizing titrant for redox titrations (permanganometry). As potassium permanganate is titrated, the solution becomes a light shade of purple, which darkens as excess of the titrant is added to the solution. In a related way, it is used as a reagent to determine the Kappa number of wood pulp. For the standardization of KMnO4 solutions, reduction by oxalic acid is often used.

Ethylene absorbents extend storage time of bananas even at high temperatures. This effect can be exploited by packing bananas in polyethylene together with potassium permanganate. By removing ethylene by oxidation, the permanganate delays the ripening, increasing the fruit's shelf life up to 4 weeks without the need for refrigeration.

Potassium permanganate is sometimes included in survival kits: as a hypergolic fire starter (when mixed with glycerol antifreeze from a car radiator; as a water sterilizer; and for creating distress signals on snow).

Potassium permanganate is added to "plastic sphere dispensers" to create backfires, burnouts, and controlled burns. Polymer spheres resembling ping-pong balls containing small amounts of permanganate are injected with ethylene glycol and projected towards the area where ignition is desired, where they spontaneously ignite seconds later. Both handheld and helicopter- or boat-mounted plastic sphere dispensers are used.

Potassium permanganate is one of the principal chemicals used in the film and television industries to "age" props and set dressings. Its ready conversion to brown MnO2 creates "hundred-year-old" or "ancient" looks on hessian cloth (burlap), ropes, timber, and glass.

Potassium permanganate can be used to oxidize cocaine paste to purify it and increase its stability. This led to the Drug Enforcement Administration launching Operation Purple in 2000, with the goal of monitoring the world supply of potassium permanganate; however, potassium permanganate derivatives and substitutes were soon used thereafter to avoid the operation.In agricultural chemistry, it is used for estimation of available nitrogen in soil.

25kg/barrel  Store in a cool, dry, well-ventilated location, away from flammables, combustibles, and other reducing agents. 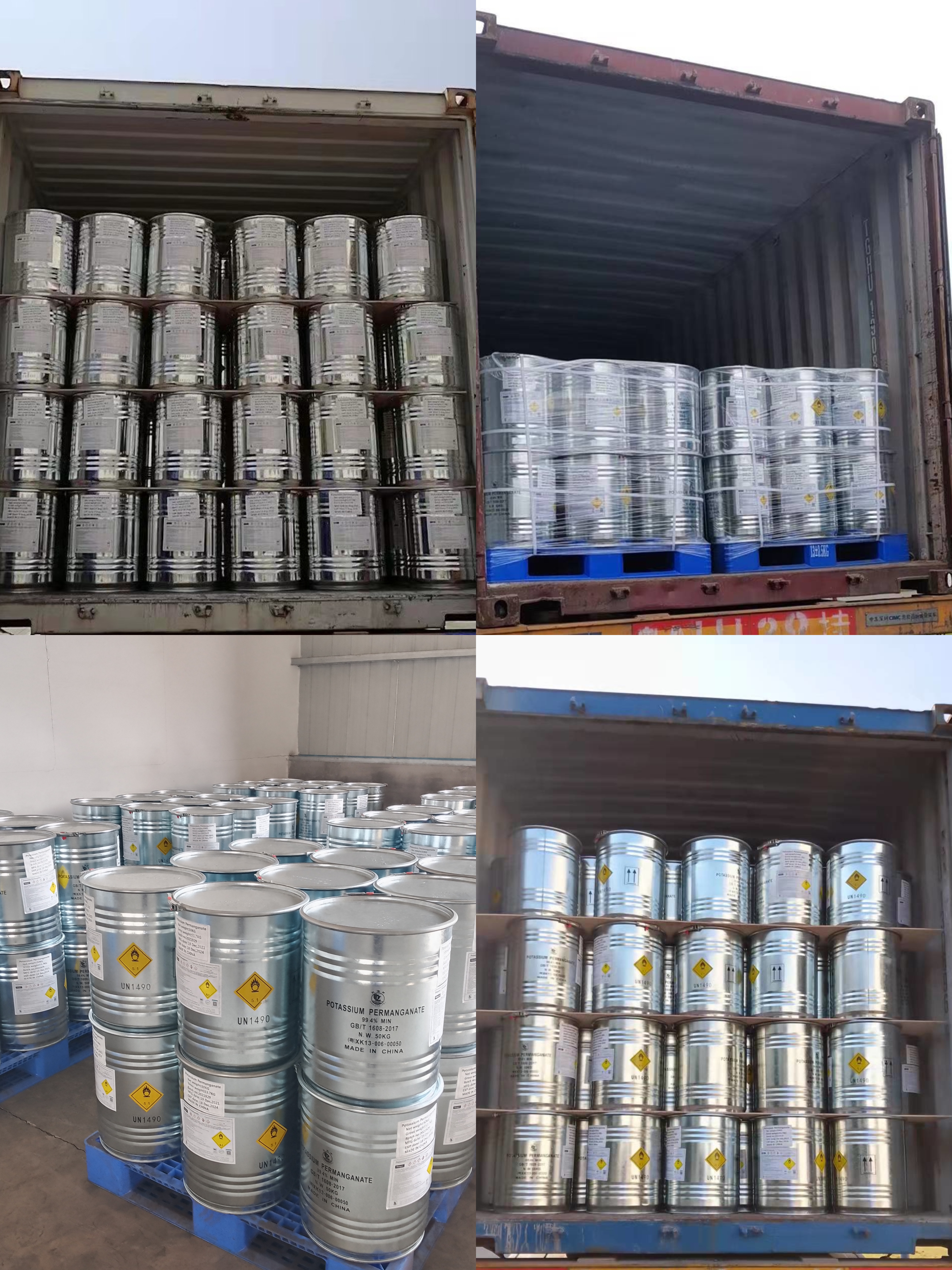